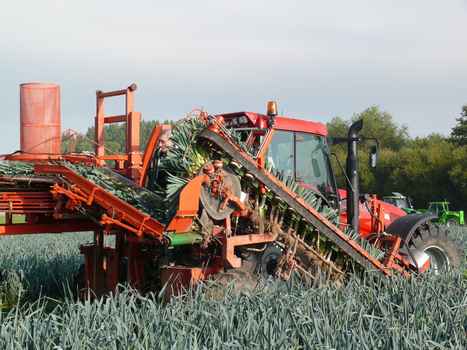 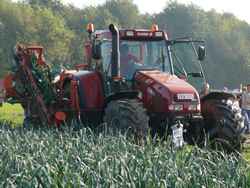 No operator on the machine required! This machine allows the tractor driver to lift the leeks faster than any other traditional machine, without any manual labour. In front, the leaves are raised by two rotating cones with spiral formed brushes on. When the leeks enter the soft belts, the raised leaves are trimmed to length. A double shaking mechanism and a pair of rotating brushes clean the soil from the roots. The double rubber disks at the end of the lifting arm rotate the leeks 90° on a climbing conveyor belt. Here, roots and leaves are aligned before being laid smoothly on the round shaped rotating container. This container starts empty just under the conveyor belt and lowers automatically as the container is being filled. The minimum falling height guarantees the leek to be properly arranged in the container. 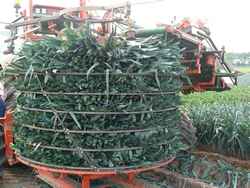 The patented round containers offer a lot of advantages :

The perforated central column supports the roots and allows them to be ventilated, the round surface preserves more space for the leaves, this makes that the leek stays horizontal, even when the container is full, the outer rings prevent the leek from falling out and are raised as the container is lowered.

A full container can load up to 900 kg leek (net after being washed and peeled). 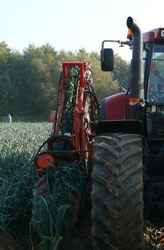 The conical torpedo’s lift a maximum of leaves to be trimmed by the double trimming disks. The trimmed leaves are evacuated far away from the next row to allow a good sight at the lifting arm entry. The rubber disks and the alignment system on the conveyor belt make sure the leek enters the container with its root against the central column. The minimum falling height  and “endless flow” on the round container result in minimal damaged leek. Because the leek is not pressed in the container, it is very easy to unload it for washing and peeling.

The only factor which stipulates the lifting speed is the soil condition. No more fagged out operator at the back of the machine after a few containers. The big capacity containers also reduce the handling time of loading and unloading.